Blogger Alisher Taksanov in his recent publication is is trying to answer his own question: What was the real main purpose of meeting between Karimov and Didier Burkhalter, the President and the Minister of Foreign Affairs of the Swiss Confederation, chairperson-in-Office of the Organization for Security and Cooperation in Europe,  at Oqsaroy residence on 21 November 2014. According to the US Geological Survey, in 2011 and 2012, Uzbekistan produced 91 and 90 tons of gold, respectively. Total volume of gold reserves in the country is estimated by experts in 1.7 thousand tons. Uzbekistan ranks 10th in the world rating of gold production – 3.3% of global production.
In August 2014, Switzerland imported 21.5 tons of gold from Uzbekistan at 847.7 million francs. However, there is no transparency in this transaction; it is unknown who carried out the operation and based on what documents and paperwork. Suggesting that corrupt elements in Uzbekistan continue to rely on Swiss partners in concealing their assets, money and gold laundering.

Interestingly, in this respect that there was nothing signed or “agreed” officially during the visit of Swiss diplomat to Tashkent in November last year. The visit did not have status of a public or an official, no special ceremonial protocols were respected. No visits of other governmental entities preceded it. 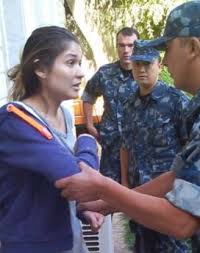 Status of Uzbekistan in the world rankings of corruption, freedom of speech, business, and democracy is well known in Switzerland, and it is not surprising that D.Burkhalter has something to talk about with Karimov, at the background of the investigation carried by Geneva prosecutors on the corruption scandal around dictator’s daughter.  It is not difficult to see the mutual interest of the sides; Swiss wants “easy” money and gold, and Karimov might want to work out how to retrieve the assets frozen on Gulnara related accounts.
Original in Russian (blocked in Uzbekistan)

I was born and raised in Uzbekistan and lived in that country for about two thirds of my life. I left the country about 14 years ago but sustained tight bonds with my family and friends living there. I know and communicate personally with hundreds of people including blue-, white- or pink-collar workers. I am naturally very attached to and concerned with everything that is going on there.
View all posts by Ahmed Islamov →
This entry was posted in Gulnara Karimova, opinion, people, politics and tagged Gulnara Karimova. Bookmark the permalink.